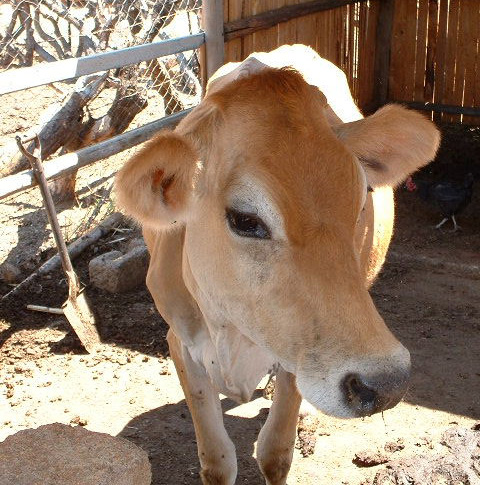 "I am very proud of Heifer, it brought light into my life and it took away hunger and stress" remarks Nzuzo Hlongwane (28) from Heifer International South Africa's (Heifer) Thusanang Dairy project in Matatiele, Eastern Cape.

Nzuzo and his wife, Maria (22) are not formally employed and, prior to becoming project members, they survived only on an income from their spaza shop. Since joining the Thusanang dairy project in October 2013, Nzuzo and Maria received a jersey cow, vegetable seedlings and training in vegetable production, water harvesting, agro-ecology, raw milk and cream handling and gender awareness. The Hlongwane family now has a flourishing vegetable garden with onions, tomatoes, spinach, cabbages and green peppers and earns R500 per month from milk and vegetable sales. This has enabled Nzuzo to buy food and groceries for the household on a monthly basis and have milk and vegetables for consumption.

The project has also improved relationships in the family - "as a husband I have built a very good relationship with my wife through gender awareness that I learnt with Heifer" says Nzuzo. The couple now looks forward to Passing on the Gift® - a Heifer concept whereby each recipient of Heifer resources passes on the equivalent of what he or she received to another needy family in their community.