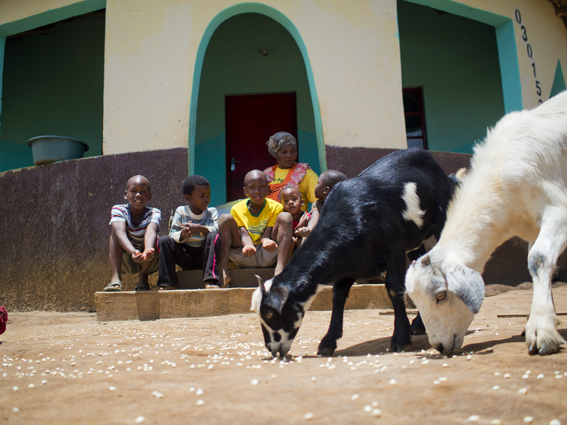 Mrs. Patience Qwabe (54) has a gentle smile and soulful eyes, which tell the story of a woman who has experienced hardship, but she has endured and remains kind, strong, confident, and true to her name.

She lives in Xamukavikanjelwa village, Nkandla municipality, Uthungulu district, in South Africa’s KwaZulu Natal province with her husband, Mr. Mzamo Qwabe (64). Patience was not born here. She moved here while still young. “It has changed. Now the water in the river is much less and the grass that is here is different from when I was growing up,” she said.

Today, they live on Mzamo’s grandfather’s land. They have 4 hectares, but less than 1 acre is currently being used for cultivation. Mzamo was working for a company in Johannesburg when he came back and met Patience in his home village. They fell in love and were married on November 22, 1982. He worked in a nearby paper mill until 1988, when he started a government job.

Their only source of income was from his job as a maintenance worker for the municipality. Mzamo earned about 700 Rand per month, about $60 USD a month or less than $2 per day. One US dollar (USD) is equal to 11.6032 South African Rand (ZAR). This was never enough to pay for all the things their growing family needed.

Patience and Mzamo have four children (3 daughters and 1 son). They also have six grandchildren (3 girls and 3 boys). Eleven of these family members live in Xamukavikanjelwa with them. Only one daughter lives and works in Johannesburg.

Fortunately, Heifer South Africa had a project in their area. Patience applied and in March 2013 she received: two goats (does), fruit trees (banana and apples), and vegetables (carrots, spinach, cabbages, onions, tomatoes and beets). Her two goats have produced 5 offspring. Two were passed on to another family. She kept two and one was sold for 1,000 Rand.  “We sold one goat and bought fencing to expand our garden,” said Patience. “I like planting so I needed a bigger place to work.” Some of her fruit trees were also eaten by a neighbor’s goats, so Patience needed a fence to protect the plants.

She also received training: goat management, kitchen garden, fruit tree planting, and Heifer’s Cornerstones. Her favorite Cornerstone is Gender and Family Focus. Patience and Mzamo have learned more about how to share the work and make decisions together. “We discuss things,” she said. “It has created unity among our family. We are each respected and valued.”

Patience wants everyone in her family to know how to care for the animals. “It is important that we all own the animal so that if one person isn’t there, then the others can continue,” she said.

These animals are providing her family with valuable milk and manure. They had to buy 10 Liters of milk per week before the project, because they didn’t have cows that were giving milk. Now, her goats produce most of what the family needs and they only have to buy 4 Liters. Patience has witnessed how the goat milk has improved the health of her younger children and grandchildren, especially those with asthma.

The manure and Heifer trainings have allowed them to grow more vegetables. Patience has even begun selling some cabbage and spinach. She earns $233 (2,700 Rand) per year, or $2.57 per day, in addition to Mzamo’s salary. She has raised her family’s income by 32%. This is a fantastic achievement in less than two years.

This increase in income, combined with more vegetables and fresh milk has greatly improved their diet. “We are eating healthier now because we can balance our diet between vegetables, starch and protein,” said Patience. Because their diet has improved, so has their health. “We were at the clinic every month with different diseases,” she said. “Now we are fine.” The last time someone in their family was ill, was back in June 2014.

The Qwabe family and the number of livestock they own continue to grow, so Patience and Mzamo have begun to plan for the future. “Our dream is to build a block house. Our house now is just a mud one,” she said.

Patience believes Heifer has an important role to play in South Africa’s future. She has seen how this project has benefitted her community and knows that more is needed. “Yes,” said Patience. “There are a lot of needy people that need this help.”

Patience and Mzamo believe that this type of development and being in a Heifer group creates a support network. She has even become the Secretary of the Zusiphe Goat Project. “If someone comes from outside and steals a goat, then your neighbors might see and know that it is your goat, and they will stop them,” she said.

There have been problems with theft in Xamukavikanjelwa village. Occasionally, some outsiders have come in and taken things, even cows. She hopes Heifer assistance and what it teaches will spread across South Africa, so that through projects like this other families will learn how to share and care for their neighbors. “It will keep everyone busy,” said Patience. “If everyone has livestock and gardens it will reduce the envy and there will be more equality.” Mzamo agrees, “This should continue because it helps to stop people from stealing because now you have your own things and won’t steal from a neighbor.”

Heifer’s assistance is improving the whole area. They provided 312 does and 104 bucks to 104 families, along with fruit trees and vegetables. “The project is not just for me, it is for everyone, so we need to help one another,” she said. According to Patience, it has especially benefitted the women. “Most women now have gardens, even if they didn’t before, and now they own livestock,” she said. “It is very easy to sell a goat in this community. People use goats for ceremonies so they are always needed.”

Another woman who has greatly benefitted from Heifer’s help is Ms. Ncamsile Ngema (31). She lives in Cholwane village, Nkandla municipality, Uthungulu district, in South Africa’s KwaZulu Natal province. Although Ncamsile is younger than Patience, she too has faced many challenges.

When she was a teenager her father died, her mother became ill, and daily life was a struggle. “It was difficult because my mother wasn’t working. We had to get up early to help neighbors with weeding their fields so we could get money. Sometimes we would help neighbors with renovating their houses,” she said. Seven years later her mother died, and at the age of 21 she was left to support her family.

She lives with her son, Smelokuhle Zulu (7); her two sisters, Qinisile Ngema (23) and Hlakaniphile Ngema (20); her two niece, Nosihle Mahaye (2.5), Qinisile’s daughter and Nokuphiwa Mahaye (1), Hlakaniphile’s daughter; and her cousin, Mbuso Mathebula (23). They survived on government social grants (welfare) for the three children totaling less than $86 (1,000 Rand) and occasional labor. They had five cows, but three died after her parents died.

They were eating three meals a day, but their diet was pretty poor. It mainly consisted of mealie meal (a local type of corn meal), potatoes, beans and cabbage. They only had meat on holidays, about six times per year.

Ncamsile was very excited when she joined this Heifer project and found out that she would receive goats. She was given two does in July 2013, along with seedlings (cabbage, spinach, beet and onion) and fruit trees (oranges, bananas and apples). Her does produced two bucks in September 2014. Ncamsile has decided to raise these bucks and sell them when they are 8 months for about $86 (1,000 Rand).

She has participated in several trainings, including: vegetable production, livestock management, and Heifer’s Cornerstones. Her favorite Cornerstone is Passing on the Gift. “It is important to help your neighbor since you were helped so that even your neighbors can have livestock,” she said.

Thanks to what she learned from Heifer and the manure her goats produce, they now have more vegetables and are able to eat meat twice a week. “We can eat meat and vegetables,” said Ncamsile.

Before the project began, they had no animals, no manure, and no maize. Now they have two cows, four goats and ten chickens. “We used to plant but it wasn’t ever guaranteed to germinate. Now it is guaranteed to germinate and it is green,” said Ncamsile. “It is greener than before.” The manure is strengthening the soil and improving their yield. Their soil has improved so much that she was able to plant maize for the first time this year.

In addition to the social grants, Ncamsile’s family is now earning income from their garden. They sell cabbage and green peppers 60-100 Rand per week. “Now we can get money from our garden. We are able to buy what we don’t have and send my child to school,” she said. Ncamsile was also able to find work at a nearby daycare. She earns about $690 (8,000 Rand) per year.

This project has dramatically impacted the lives of Ncamsile and her sisters. “It has brought us dignity. Previously, only men owned livestock. Now we can treat our own animals when they are sick,” she said. “Now we are independent. Previously, we had to go around asking for help if our animal was sick. Now we can help ourselves.”

“We are happy with Heifer’s help,” she said. They will continue to sell goats and vegetables. They plan to save money to rebuild their small houses and fence the land.

Ncamsile has been encouraged by all that has changed. She has seen her family’s situation quickly transform and wants other families to have the same opportunity.

“Yes,” said Ncamsile. “There are a lot of people who are needy. Heifer’s assistance can help open their minds to selling vegetables and owning livestock that they can sell.” You can help open minds and bring hope to women just like Patience and Ncamsile.

Taking a break and learning about silver salmon

Angelo Wiki Page is Give and Gain Top 10 Activists of the week !