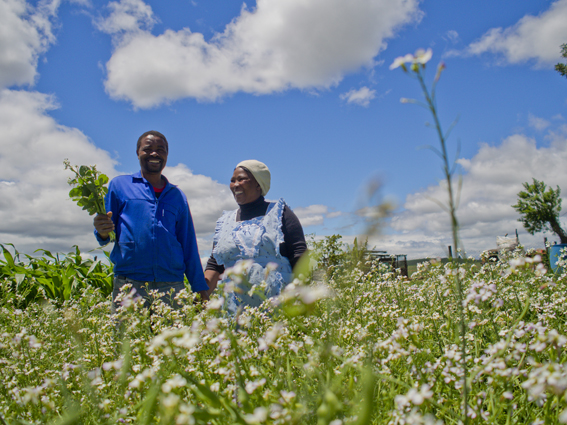 Many of the farmers that Heifer International helps are families that have recently returned from urban areas and are truly farming for the first time. The trainings and support Heifer provides, helps to smooth the transition.

Mr. David Ntomela (60) grew up in a poor family. He was a cattle and goat herders in his youth, but like so many other young men, the lure of the big city eventually pulled David away too.

He moved to Johannesburg. While there he taught himself plumbing and found regular work. Unfortunately, he and his wife, Mrs. Getrude Ntomela (56), were forced to live separately for many years. She lived in a small town and he was in Johannesburg. This caused her to worry a great deal.

He finally retired and left Johannesburg in 2011. This was when they moved to Xamukavikanjelwe village. Neither of them was from this village. They moved here because the area’s tribal authority gave them land.

David wasn’t a farmer, so after moving here they struggled a lot. “We didn’t know how to manage our animals,” said Getrude. He wasn’t sure what he would do, and then a neighbor told him about a Heifer project that was just being setup in their area. The neighbor said, ‘Heifer is a project to help poor people.’ He said that if David signed up, then Heifer would provide them with training, goats and vegetables. “I love livestock, that’s why I joined this project,” said David.

They received 2 goats (meat) on July 18, 2013. They also received fruit trees (apples and bananas) and vegetable seedlings (cabbage, onion and spinach). Their goats have produced six offspring. Two were used to complete their pass on requirement in March 2014. They have kept all the others to either breed or sell as needed. David has participated in many Heifer trainings: goat management, vegetable production, Cornerstones, environmental awareness, etc.

His favorite Cornerstone is Sharing and Caring. He really likes this idea, because it promotes stronger communities and can make everyone’s life better. “If your neighbor is having a problem, you can go and assist,” said David. “As much as you can help your neighbor, your neighbor can help you. You can’t know everything.”

Getrude also believes in helping your neighbor. That is why when she mixes up amasi (fermented milk) and mealie meal, she always makes extra so that she can share it with all the children in the neighborhood.

As they progressed in the project David and Getrude found that they were getting more and more produce. Every successful farmer needs manure, but prior to the project, they only had 20 chickens. Now they have 6 cows, 6 goats and 15 chickens. “The manure is powerful,” said David. “I am able to save money because I don’t have to buy manure.”

When David didn’t have manure, his land wasn’t fertile enough to produce maize. Now the soil is much healthier. “There is a change,” he said. They are harvesting 320 to 400 kg of just kernels.

They ate three meals a day before the project, but they weren’t very nutritious. Their typical meal was potatoes and beans, with meat only for special holidays. Now meals are more balanced: cabbage, sweet potato and green peppers. They are milking 10 Liters per day from their cow, and eat meat every weekend. Getrude points out that they could afford to eat meat throughout the week, but purposely limit it to weekends so that their grandchildren eat plenty of vegetables.

One of the biggest impacts of this project for Getrude is that they can now raise enough vegetables to meet their needs and have some left over to sell. They earn $34 (400 Rand) per week from selling vegetables. One US dollar (USD) is equal to 11.6032 South African Rand (ZAR).

“We don’t have financial problems,” she said. David is very proud of how much of their own food they produce. “Now we can plant and we don’t have to go somewhere to buy vegetables,” he said. “All the money we spent at supermarkets, we can now save it,” she said.

Much of the money that has been saved is now being used to pay for school uniforms. “I want to see them get an education and get good jobs,” she said. “It will help them get a job and be employed.” Getrude wants them to use their minds.

She has made it a point to teach her family how to manage the farm. “We have taught them how to take care of our animals and the gardens so that even if we are no longer here they will be able to continue,” said Getrude.

Another important impact of this project is the new gender awareness this project brought. “It has helped us very much,” she said. “Since this project came, our marriage has gotten better.” They are discussing how and when to work. They are talking and planning together. “Now we live and work together. We help one another in this family,” she added.

This project has also improved their status in the community. “We are big people,” said Getrude. David hopes that it will continue to improve. “I want to multiply my livestock,” he said. More animals would increase his status in the community and they would be able to earn more money. He also plans to save money and build a bigger house.

They are currently producing most of their own food, but David wants to add new vegetables so that they can further diversify their diet. He said that he wants to provide his children and grandchildren with even better food.

When David and Getrude decided to begin farming, after spending much of their lives in the city, they needed some help. Fortunately, Heifer was there to provide them with trainings and animals, so they could create a sustainable future for themselves and their children. But there are many families that still need support. “Heifer needs to expand and help more people,” said David. “Most of the families here are poor and it would be good if Heifer could continue.” Generous support from donors like you has allowed Heifer to provide people around the world with the tools they need to create strong, self-reliant families for more than 70 years.

Taking a break and learning about silver salmon